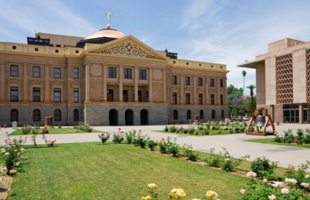 Yesterday, the Goldwater Institute, a libertarian public policy think tank, weighed in with a legal memorandum aimed at criticism that House Bill 2221 “raises separation of powers concerns by interfering with the Arizona Supreme Court’s power to regulate attorneys.”

Article III is the separation of powers provision of the Arizona Constitution. It states: “The powers of the government of the state of Arizona shall be divided into three separate departments, the legislative, the executive, and the judicial; and, except as provided in this constitution, such departments shall be separate and distinct, and no one of such departments shall exercise the powers properly belonging to either of the others.” Generally, the so-called separation of powers doctrine is intended to prevent one branch of the government from overreaching the other coequal branches.

Responding to allegations that HB 2221 infringes on state constitutional separation of powers, the memo’s authors declared, “This is incorrect. HB 2221 is consistent with the Legislature’s authority to protect constitutional rights and ensure transparency in government, while respecting the Supreme Court’s role in attorney regulation.”

The memo also stated that the Bill has nothing to with regulating the practice of law or attorney ethical rules. In addition, the authors asserted that the legislation is not procedural but “plainly substantive” because “it substantively protects attorneys’ free speech rights and defines a right to access public records.”

For additional interesting background on separation of powers, see:

“The primary source of judicial power in each state is the state constitution. But the constitutional text on judicial power in nearly every state constitution is phrased in such vague and general terms as to require extensive interpretation to make it meaningful in application — interpretation that leaves most interpreters with considerable discretion in determining what the constitution provides.”  Johnstone, Quintin, Unauthorized Practice of Law and the Power of State Courts: Difficult Problems and Their Resolution, 39 Willamette L. Rev. 795, 830 (2003) via Faculty Scholarship Series. Paper 1891. http://digitalcommons.law.yale.edu/fss_papers/1891External Control over the American

“The legitimacy of Arizona Supreme Court decisions allocating the final
word in these areas of overlapping authority is always suspect, because the court
becomes the arbiter of its own power vis-à-vis the legislature.” Scheneyer, Ted, Who Should Define Arizona’s Corporate Attorney-Client Privilege?: Asserting Judicial Independence Through the Power to Regulate the Practice of Law, 48 Ariz. L. Rev. 419 (2006)